While the term Cannabinoid might still be unknown to many, those who follow the news have definitely heard about it recently as it is more and more present in the news thank to its tremendous health benefits. The root of the word Cannabinoid is “Cannabi” and it comes from Cannabis. In this article, I will try to share some basic knowledge on cannabinoids without going into too scientific description that might stir you away from reading till the end.

Cannabinoids are all the chemical compounds found in the cannabis plant and also called Phytocannabinoids; over 100 cannabinoids have been identified so far and researchers believe there might be more Cannabinoids in the plant and researches are still going on. The two most famous Cannabinoids known to date are: the CBD or Cannabidiol for its healing properties and the THC or Tetrahydrocannabinol for its psychoactive properties. THC is the substance that makes people feel high. 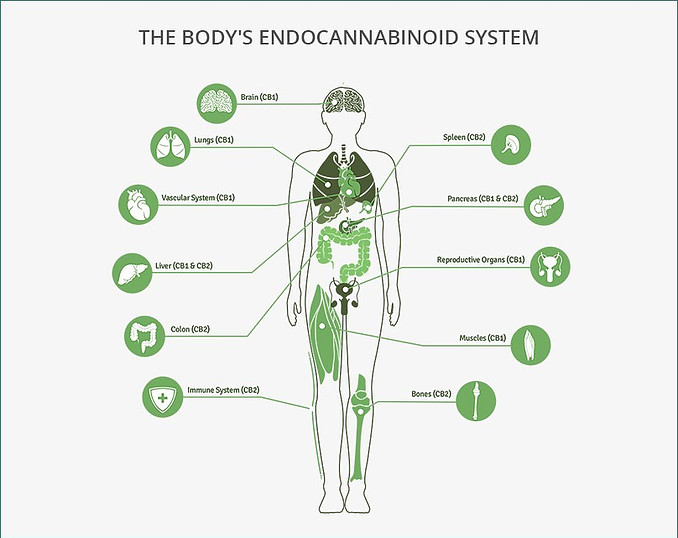 Endocannabinoids help the different systems of the body communicate together with main goal to reach homeostasis. Homeostasis is the state of stability of the body’s internal environment despite any fluctuation of the external environment. I could describe it with more sophisticated terms but this would not add much to the information anyway.

As mentioned above, the system is made of Cannabinoids and receptors; receptors attract and decipher different types of cannabinoids:

While you cannot patent a natural molecule, the pharmaceutical industry has mimicked the natural CBD and created what we know as synthetic CBD, also called isolated CBD, trying to tap into the potential financial benefits that could and will come with the success of the CBD. Marinol is one of those isolated cannabinoid that was created in the eighties to replicate the THC effect but never delivered. The synthetic version of the CBD has so far not been able to deliver on similar results that we’ve seen from the Phyto-CBD extracted from the cannabis plant.

Two Israeli scientists believe that this is because of what they call the “entourage” in the Phytocannabinoids. Entourage is believed to be all the other cannabinoids within the cannabis plant that work together with the main cannabinoids (THC and CBD) to deliver the tremendous health results that we know today. In other words, each Cannabinoid on its own cannot deliver the tremendous results that they would deliver together when combined. While studies have proven that THC and CBD can both bring some limited results when taken in isolation, strong evidences are showing that THC and CBD work better together and address far more health conditions.

Based on the above, no lab synthesized Cannabinoid will ever bring you the results that a full cannabis plant extract would give you. Do not let yourself fooled by anyone. Get the real deal.

Without going into much detail, the list below gives an idea of some of the health conditions that are addressed by the use of full spectrum cannabinoids.

Cannabinoids treat most of these diseases and when they do not treat the disease, they control the symptoms in a way that no lab manufactured product would, since it comes with minimal to no side effects at all. If we only take the example of cancer treatment, hemp oil has proven to completely kill skin cancer cells. It has proven to take the pain away and reduce nausea that comes with the chemotherapy and in some cases even removed the chemotherapy and the radiations completely from the equation according to those who treated their cancer solely with hemp oil.

A few Cannabinoids found in the Cannabis plant

CBD is probably the Cannabinoid with the most health benefits. It works even better when properly combined with THC and the right entourage.

Responsible of the psychoactive effect of marijuana, THC has also proven to have great medicinal uses, especially when combined in the right proportion with CBD.

This is the main component of the cannabis plant that turns into THC when heated. This is what helps as anti-spasmodic and anti-inflamatory

This is the parent molecule of the Cannabidiol. When heated, CBDa turns into CBD

Only different from the CBD because of a carbon chain, it might be great in the treatment of epilepsy. The future will tell.

CBG tends to kill and slow down the growth of cells and tumors as well as promote bones growth.

CBN is produced from the degradation of THC and as such is also psychoactive although midly.

Studies have shown that when combined in right proportion with CBD and THC, it acts as an anti-depressant. It also has ant-viral and anti-inflammatory properties.

Not all Cannabis strains have this cannabinoid. THCV helps reduce panic attack and suppress appetite.

I hope the information in this post was put together in a way that help you understand what it is all about when we talk about Cannabinoids. If there is one take away from this article, it should be that the main cannabinoids in the cannabis plant are CBD and THC and that a good combination of the two brings tremendous results in the treatment of various health conditions as long as they have their entourage in the equation. Stay away from the synthesized cannabinoids, Mother Nature makes the real deal for you.